Paul Poce started running after he did some boxing in his teens. He thought that running was a better sport, and started under Lloyd Percival, who was his coach with the Toronto Red Devils. Then a few of his friends started the Toronto Olympic Club in 1954 and he ran as well as started to coach. He won many races including the Canadian Cross Country Championships.

He has also coached Javelin, Pole Vault, Long Jump, Hurdles in TOC and Steeplechase for Canada and also was Canada’s National Walks Coach. 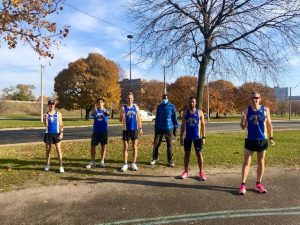 Saturdays year round at 9:45 am at Swansea Community Centre, the home of TOC,

Tuesdays and Thursdays at 5:45 pm at Swansea Community Centre or,

Tuesdays and Thursdays at 5:45 pm at the Toronto Track and Field Centre and/or Swansea Community Centre during winter.

As we initiate a slow re-open of team practices in small groups, our regular meeting times are currently on hold. Please contact your coach for more information on resuming practice.